Toews, the 22-year-old Chicago Blackhawks captain whose team won the Stanley Cup last month, was being honoured throughout the day at various locations.

The tributes to Toews began at 10 a.m. with a private ceremony at the Manitoba legislature, where Premier Greg Selinger officially named a body of water near Flin Flon as Toew...

LOS ANGELES -- Dylan McIlrath is used to hanging out with his junior teammates in a basement in Moose Jaw. His idea of a big night in Winnipeg was going to Earls. That changed in a New York minute on Friday night.

McIlrath, the towering defenceman who collected 19 fighting majors last season for the WHL's Moose Jaw War­riors, is on his way to Manhattan as the New York Rangers selected him 10th overall in the 2010 NHL entry draft.  McI...

June 23-Dylan McIlrath of the Moose Jaw Warriors will enter the 2010 NHL Entry draft ranked 17th overall. Dylan is the son of Mike McIlrath, who plays with us on our Thursday Hockey.  The Entry Draft takes place on June 25–26, at the Staples Centre in Los Angeles. 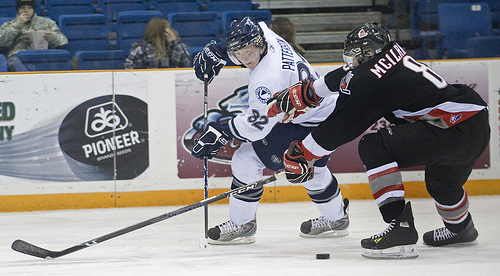 The Ottawa Citizen June 5, 2010--Ottawa lawyer, (and Heartbreaker) Lawrence Greenspon, shows off his new bike during the the annual motorcycle Ride For Dad which raises awareness of prostate cancer, June 5, 2010, Ottawa. It kicked-off at the National Aviation Museum. Over 1,700 motorcycles were part of the event.

WINNIPEG, May 28--Heartbreakers Hockey manager Dave Springett announced today that the final roster spot on the Europe tour has now been filled.  Goaltender Ray Rodych from Regina, Saskatchewan joins the team for his first visit to Europe.

Springett adds, "We are very happy to have Ray in net for us and to have our roster set for the tour."  The club leaves on January 20th for Munich and will play 5 games in Germany and Austria.

GLENDALE, ARIZ. -- The return of the NHL to Winnipeg appears to be on hold for another year, as the City of Glendale has agreed to meet the league's requirements for keeping the Phoenix Coyotes in Arizona for the 2010-2011 season.

Glendale's seven-member city council voted unanimously Tuesday night to approve a plan to spend up to $25 million to hold onto the troubled franchise for another year if the NHL doesn't find a new buyer dedicated to keeping it in ...

Will the Coyotes be playing next year in Phoenix or Winnipeg?

The Manitoba Moose and True North Sports and Entertainment released a statement Friday afternoon in response to reports Thursday that negotiations with Chicago sports mogul Jerry Reinsdorf to keep the Phoenix Coyotes in Glendale next season have hit a snag.

"While we understand the current situation with the hockey team in Glendale is an uncertain one, we will continue to respect the efforts of all parties involved to mai...

WINNIPEG, May 5--Heartbreakers Hockey have added another player to the Europe 2011 tour roster. Tim Carr, 39, a defenseman from Thiensville, Wisconsin will be taking the place of Brad Biggs who is unable to participate.  Team manager Dave Springett says "while we are sorry that Brad won't be with us again, we are very happy to welcome Tim to the team."  The team leaves for Munich on January 20th, 2011 and will play 5 games during the tour.

WINNIPEG, April 30--Heartbreakers Hockey manager, Dave Springett announced today that goaltender Allan Berthelette has joined the team for the 2011 tour to Germany and Austria.  Berthelette, 46, is from Winnipeg and will be playing in his first European tour.  One goaltender spot remains open and Springett has spoken to a number of potential players with the expectation of filling the position within the next few weeks.

WINNIPEG, April 8--The Heartbreakers Hockey Club are pleased to announce that Marc Gratton of Rockland, Ontario has joined the team for the 2011 tour to Germany and Austria. Gratton, 36, will be playing defense on his first tour with the club. Two goalies are still needed to complete the roster.

NHL Back In Winnipeg?

A media report claims Winnipeg could get an NHL team back but only if two other deals fall apart first.

The Phoenix Business Journal reported Monday that the NHL is working on a backup plan with Toronto billionaire David Thomson and True North Sports and Entertainment.

The Journal's website says the plan would bring the Phoenix Coyotes back to Winnipeg only if a deal with Ice Edge Holdings or Jerry Reinsdorf falls through.

The puck that Sidney Crosby shot to clinch Canada's 3-2 overtime win against the United States in the final of the Olympic hockey tournament has found a home.

Folowing the "golden goal", the puck somehow made its way to the International Ice Hockey Federation offices in Switzerland. It's whereabouts set off a bit of a storm over who actually "owned" the piece of rubber and where it should reside.

The IIHF and Vancouver Olympic officials are expected to ...

Start a Free Blog at Webs.com